The Jets reportedly asked D’Brickashaw Ferguson recently to take a pay cut, and while Ferguson has made a decision that will allow Gang Green to create plenty of cap room, it likely wasn’t the decision Jets fans had anticipated. 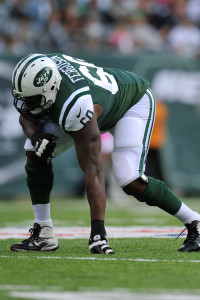 According to Rich Cimini of ESPN.com (Twitter links), Ferguson has decided to retire after 10 NFL seasons. Cimini suggests that the veteran left tackle is “completely healthy,” and he doesn’t believe the Jets’ pay-cut request was an overriding factor in the 32-year-old’s decision. According to Cimini, Ferguson simply believed he could no longer play up to his usual standard.

The fourth overall pick in 2006, Ferguson didn’t miss a game in 10 years with the Jets, starting each of the 160 regular-season games he was eligible to play. During that stretch, he earned three Pro Bowl nods — those came in consecutive seasons, from 2009 to 2011.

Ferguson had been slated to count for $14.107MM against the Jets’ cap in 2016, which was somewhat problematic. New York is still trying to figure out what to do with Muhammad Wilkerson‘s $15.7MM cap hit, and the team also wants to bring back quarterback Ryan Fitzpatrick. Ferguson’s decision to retire will create $9MM+ in cap savings, reducing his charge to just $5.014MM, which will give the Jets some additional flexibility.

Of course, while Ferguson’s retirement is a boon for the Jets’ cap, it creates some problems on the offensive line, where the team will have to find a solution at left tackle for 2016. There are some internal candidates and potential veteran solutions – Will Beatty is a free agent and Ryan Clady of the Broncos may be available – but the tackle position now figures to become a greater priority for New York in the draft. Aaron Wilson of the Houston Chronicle noted this morning (via Twitter) that the club has interest in Texas A&M tackle Germain Ifedi.

Although Ferguson’s decision to call it a career will affect the Jets’ plan for the rest of the offseason, it didn’t catch the club entirely off guard. According to Albert Breer of the NFL Network (Twitter links), the veteran lineman had been mulling retirement for a while, and has kept the Jets in the loop throughout the process, so the team wasn’t blindsided by today’s news.

5 comments on “D’Brickashaw Ferguson To Retire”