FRIDAY, 8:12am: Schwartz’s one-year deal with the Lions is a minimum salary benefit contract, according to Dave Birkett of the Detroit Free Press, who tweets that the veteran lineman received an $80K signing bonus and had $120K of his base salary guaranteed.

WEDNESDAY, 10:02am: The Lions have officially signed Schwartz, the team confirmed today in a press release.

7:52am: The Lions will add some depth to their offensive line, according to Dave Birkett of the Detroit Free Press, who reports (via Twitter) that the team has agreed to terms with free agent lineman Geoff Schwartz. Per Ian Rapoport of NFL.com (via Twitter), it will be a one-year deal for Schwartz in Detroit. 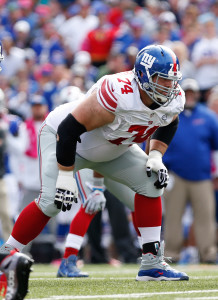 Schwartz, 29, signed a four-year contract with the Giants in March 2014, but has been plagued by injuries since then, appearing in 13 games over the last two seasons for New York. He started 11 games for the Giants in 2015, but his season was cut short when he fractured a bone in his left leg in late November, forcing the team to place him on injured reserve. The Giants cut Schwartz earlier in the offseason.

Since becoming a free agent, Schwartz has received interest from multiple teams, paying a visit to the Steelers and nearly visiting the Cardinals as well — that meeting in Arizona was scuttled after the club signed Evan Mathis. In joining the Lions, Schwartz will be playing for fifth team in nine NFL seasons — he has also had stops in Carolina, Minnesota, and Kansas City since entering the league as a seventh-round pick in 2008.

It remains to be seen what role Schwartz will have for the Lions, but guard is his primary position, and if he’s healthy, he should certainly rank among the team’s top five offensive linemen, making a starting job a real possibility. Larry Warford and Laken Tomlinson were Detroit’s starters at guard a year ago, but neither player is elite, so Schwartz should push them for playing time, and could also get a look at right tackle.