The Rams have officially placed troubled running back Tre Mason on the reserve/did not report list, according to multiple reports. Los Angeles held mandatory team meeting Friday morning, and Mason did not attend, reports Vincent Bonsignore of the Los Angeles Daily News (all Twitter links). Per Bonsignore, the Rams weren’t surprised by Mason’s absence, but because of their inability to get in contact with him, the club wasn’t sure if Mason would be present. 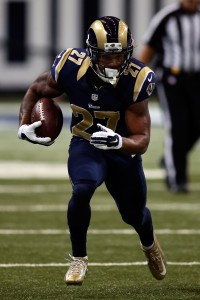 Mason’s recent off-field issues have been well-documented, beginning with a March arrest for reckless driving, resisting arrest, and possession of cannabis, an incident that is reportedly one of just five that have involved Mason and the police in the past several months. According to TMZ Sports, Mason’s family is concerned for his well-being, while the Rams have seemingly accepted that Mason won’t be contributing any time soon, as head coach Jeff Fisher said in June that his team has to “prepare [itself as though] that Tre’s not going to be here.”

At this point, a team or league suspension for Mason appears all but certain, while Los Angeles could also simply waive the third-year running back. The Rams are well-stocked at running back, as Roster Resource shows 2015 Offensive Rookie of the Year Todd Gurley leads a group that includes Benny Cunningham, Chase Reynolds, and Malcolm Brown. But Mason, who rushed for more than 700 yards in 2014, could have surely played a role had his personal life not become so dire.