After waiving him yesterday, the Bills “fully expect” another NFL club to land running back Karlos Williams, and we’ll find out tomorrow if any other team decided to place a claim (the waiver period is typically 24 hours, but rolls over until Monday on weekends). If no one else is interested, Williams will become a free agent. But given that Williams’ (minimal) signing bonus will accelerate onto Buffalo’s cap –meaning that any acquiring team would only be on the hook for minimum salaries for the next three years — it seems likely that Williams will get claimed. 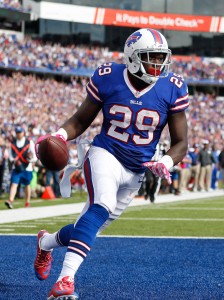 Clearly, there are reasons to be concerned about Williams’ future. He’ll be suspended for the first four games of the 2016 season after violating the league’s substance abuse policy, and he’s struggled with his weight throughout the offseason. At one point, Williams was up 261 pounds, and after losing some of that heft, he’d reportedly begun to balloon once again, leaving the Bills to wonder if he was serious about football.

But Williams also flashed dynamic ability during his rookie season, finishing with 613 yards from scrimmage and nine TDs on just 104 touches while averaging 5.6 yards per carry. The 23-year-old also became one of just two players in NFL history to score a touchdown in each of his first six games in the league. All in all, Williams seemingly defines an old adage: high risk, high reward.

Let’s take a look at several teams that could be interested in Williams, listed in order of their waiver priority:

Cleveland Browns — New head coach Hue Jackson is trying to foster a new culture with the Browns, but he’s also shown a willingness to give players a second chance. He’s embraced wide receiver Josh Gordon, who was recently reinstated from a season-long suspension, and he stood by running back Isaiah Crowell after the latter posted a disturbing image online. Crowell and Duke Johnson figure to get most of the run for Cleveland during the upcoming season, but the club should be stockpiling talent during its rebuild, and Williams would be a cheap upgrade.

San Diego Chargers — San Diego had high hopes for its rushing attack after trading up to select Melvin Gordon in the first round of last year’s draft, but offensive line injuries and Gordon’s own poor play led to the Chargers finishing 31st in rushing DVOA. Gordon then had microfracture surgery in January, and while his long-term prognosis is positive, serious knee injuries are always unwelcome news for young running backs. It looks like Gordon is already losing work to Danny Woodhead during the preseason, and if the Chargers think Gordon is in for another sub-par season, they could take a risk on Williams.

Baltimore Ravens — This is only my speculation, but given that he’s on the wrong side of 30, coming off injury, and due a non-guaranteed $3MM base salary, veteran running back Justin Forsett could be a surprise cut as roster cutdowns approach. Such a move would be made much easier if the Ravens were able to acquire a talent like Williams, who could slot in the backfield after his suspension, teaming with Javorius Allen, Terrance West, Kenneth Dixon, and perhaps Lorenzo Taliaferro. Baltimore has taken chances on character risks in the past, though the club was burned by safety Will Hill, with whom they cut ties after he was handed a 10-game suspension.

Philadelphia Eagles — Like the Browns, the Eagles haven’t been afraid to collect players who are considered character risks, as evidenced by their trade for receiver Dorial Green-Beckham last week. Philadelphia is hoping it can turn around the career of DGB, who struggled with both motivation and learning the Titans’ playbook, and they could place a similar bet on Williams. Like DGB, Williams clearly has talent, and the Eagles could use another option alongside Ryan Mathews, Kenjon Barner, Darren Sproles, and Wendell Smallwood. Turron Davenport of USA Today recently looked at how Williams could succeed in the type of outside zone runs employed by the Eagles.

New York Giants — The Giants have a stable of running backs available, with veteran Rashad Jennings leading the way for a crew that also contains Shane Vereen, Andre Williams, rookie Paul Perkins, Orleans Darkwa, and Bobby Rainey, not all of whom will make the the final squad. But New York can feature a lot of backs who play specific roles, they don’t have one who looks like a bell-cow (perhaps outside of Jennings, who is 31 years old), nor does the club have a runner with the singular talent of Williams. However, given that Big Blue is dealing with backlash after domestic violence revelations regarding kicker Josh Brown came to light, they may not want to deal with Williams, who was investigated for domestic violence at Florida State (though no charges were filed).

Oakland Raiders — The domestic violence caveat applies in Oakland, as well, as the club’s ownership group has exhibited a zero tolerance policy for such actions. But since Williams was never found guilty, or even charged, perhaps that code wouldn’t apply. The Raiders seemed intent on adding another running back this offseason even though Latavius Murray was one of only seven backs to rush for more than 1,000 yards in 2015, and expressed interest in both Doug Martin and DeMarco Murray before using a fifth-round pick on DeAndre Washington.

Detroit Lions — We’ll mention the domestic violence accusations levied against Williams one final time, as Lions general manager Bob Quinn — who said when hired that he would “not stand for” DV or dangerous weapons — recently drew some ire for signing tight end Andrew Quarless, who had been arrested on a gun charge in 2015. But after finishing dead last in the NFL in rushing yards a year ago, Detroit didn’t do much to address its backfield, adding only Stevan Ridley (free agency) and Dwayne Washington (draft). the Lions were set to work out Arian Foster before he signed with the Dolphins, so they’re clearly still in the market for running back help. Plus, as Dave Birkett of the Detroit Free Press tweets, Quinn knows Williams from the duo’s time in the AFC East.

Indianapolis Colts — The Colts spent the offseason adding to their offensive line rather than looking for legitimate backup to play behind veteran running back Frank Gore. Gore is now 33 years old, and though he’s been extremely durable throughout his career, Indianapolis would have to turn to Robert Turbin, Jordan Todman, or Josh Ferguson if Gore went down. Williams wouldn’t need to play right away with the Colts, and he’d give the club a young back to pair with the rest of their youthful offense.

Washington Redskins — Second-year back Matt Jones is locked in as Washington’s starter in 2016, but he sprained an AC joint during Friday’s preseason game. Head coach Jay Gruden doesn’t expect Jones to miss much time, but if that changes, the Redskins don’t have many other options, with third-down back Chris Thompson joined on the roster by Rob Kelley, Keith Marshall, and Mack Brown. General manager Scot McCloughan isn’t big on off-field concerns, and as JP Finlay of CSNMidAtlantic.com writes, the Redskins would probably prefer to add a more experienced back who can play immediately.

New England Patriots — It’s doubtful that Williams fall far enough on the waiver wire to reach the Patriots, but New England could certainly use another running back, especially considering today’s news that Dion Lewis will be out 8-10 weeks after undergoing another knee operation. Even with Lewis sidelined, the Pats still have LeGarrette Blount, Tyler Gaffney, James White, Brandon Bolden, and Donald Brown on the roster, but Williams offers more ability than anyone in that group. If Bill Belichick thinks he can motivate Williams, the former Bill would be a solid add in New England.

4 comments on “10 Teams That Could Claim RB Karlos Williams”