TUESDAY, 4:38pm: This is odd, but Vereen has been reinstated from the retirement list after 24 hours. It’s not clear if Vereen still plans on playing football, but regardless, he has been released by the Pats, Jeff Howe of The Boston Herald tweets.

5:54pm: Former fourth-round pick Brock Vereen will retire after spending only two seasons in the NFL, according to Jeff Howe of the Boston Herald (Twitter link). The Patriots have placed Vereen on the reserve/retired list. 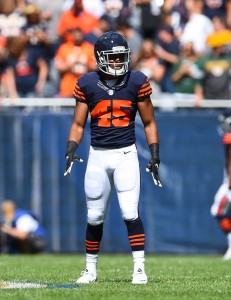 Vereen, a safety, was selected by the Bears out of Minnesota in the 2014 draft, and was an immediate contributor, appearing in all 16 games (starting four) while posting 30 tackles, one interception, and one forced fumble. His playing time dwindled during his sophomore campaign, however, and Vereen was eventually waived at the start of the 2015 season.

Vereen, who turns 24 years old on Wednesday, subsequently spent time on the practice squads of Minnesota and New England before signing a futures deal with the Pats earlier this year. According to Howe, Vereen had been having a solid camp with the Patriots, so one has to wonder if there is some underlying cause to this sudden news.

Vereen is the younger brother of Giants running back Shane Vereen.