The 49ers have agreed to sign quarterback Christian Ponder, according to Josina Anderson of ESPN.com (on Twitter). 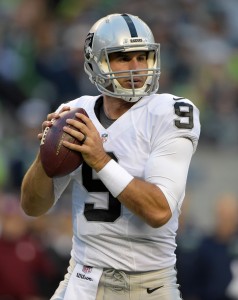 Ponder was a part of the same 2011 draft class as Blaine Gabbert and Colin Kaepernick. Oddly enough, they’ve all wound up on the same team.

The Niners found themselves in need of QB help as Thad Lewis is IR-bound and Kaepernick is said to be dealing with arm trouble. While some teams (like the Cowboys) have considered veteran trade targets at QB like Josh McCown, the 49ers opted to go with a low-cost free agent signing in Ponder.

Ponder, 28, started 36 games during his four years with the Vikings, though he was essentially the team’s No. 3 signal-caller in 2014, behind Teddy Bridgewater and Matt Cassel on the depth chart. With a career 59.8% completion rate and 75.9 passer rating, Ponder didn’t find a very active market when he hit free agency last offseason. He signed with the Raiders, but was released by Oakland prior to the regular season. During the season, he had a cup of coffee with the Broncos but never threw a pass for them.

The Bengals were tied to Ponder in December, but we haven’t heard any team linked with him since. Now, Ponder will try to get his NFL career back on track with the 49ers.