SATURDAY, 9:45am: According to ESPN.com’s Mike Rodak (on Twitter), Bush’s one-year deal includes a $1MM base salary, a $375K signing bonus, and a $125K roster bonus. Overall, the veteran’s salary cap number will be worth $1.5MM.

MONDAY, 3:43pm: The Bills have officially signed running back Reggie Bush. The pact is a one-year deal laden with incentives, a source tells Ian Rapoport of NFL.com (on Twitter). The deal should be worth up to $3MM, Vic Carucci of The Buffalo News tweets. 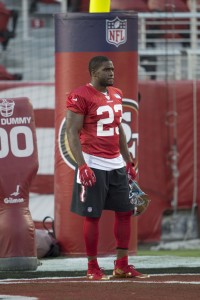 The Bills are in need of depth behind starter LeSean McCoy after Karlos Williams was hit with a four-game suspension for a violation of the league’s substance abuse policy. Fifth-round pick Jonathan Williams is also likely to be hit with a suspension after a DUI arrest. Bills coaches view Bush as an experienced vet with a similar running style to McCoy, which should allow him to hit the ground running in Buffalo.

Bush announced in February that he was intent on playing in 2016, though it was unclear at the time whether that feeling was being reciprocated back from any of the league’s 32 teams. Now, he has found his new NFL home.

Last year, Bush signed with the 49ers, but he played just five games before tearing his left ACL on the concrete at the Edwards Jones Dome in St. Louis. After finishing the year with a grand total of 28 yards, Bush says he has recovered from his injury and is ready for action.