The Vikings will start quarterback Shaun Hill, not new acquisition Sam Bradford, in their Week 1 showdown with the Titans on Sunday, reports Ian Rapoport of NFL.com (Twitter link). The team hasn’t made a formal announcement yet, but Vikings players were informed of the decision, per Rapoport. 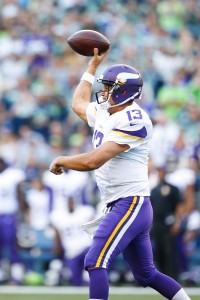 In a stunning move, Minnesota paid a lofty price – a first-round pick in 2017 and a fourth-rounder in 2018 – to acquire Bradford from Philadelphia last weekend. However, the 28-year-old simply hasn’t had enough time to get up to speed in a new offense yet. That temporarily opens the door for Hill, who’s in his second year with the Vikings. The 36-year-old journeyman’s most extensive recent action came in 2014, when he started in eight of nine appearances with the Rams and completed 63.3 percent of attempts for 1,657 yards, eight touchdowns and seven interceptions.

Of course, the Vikings are only in their current position because of the devastating knee injury starter Teddy Bridgewater suffered at the conclusion of August. Bridgewater has since undergone season-ending surgery on multiple torn ligaments, though he should be back in 2017. Without Bridgewater, who helped lead the Vikings to an NFC North title last season, the club will try to return to the playoffs with a combined effort from Hill and Bradford.

One comment on “Vikings To Start Shaun Hill On Sunday”