Marcell Dareus will return to his place on the Bills’ defensive line this weekend after missing four games due to a drug suspension. But Wednesday brought some updates in the defensive tackle’s timeline. 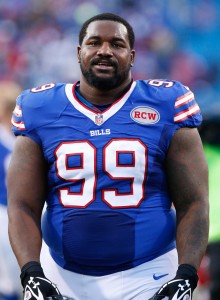 The sixth-year lineman said in August his four-game ban stemmed from missing a drug test, but Tim Graham of the Buffalo News reports (on Twitter) that wasn’t the case. Multiple drug-program violations occurred, per Graham, to cause the league to suspend the interior-line stalwart.

This was Dareus’ second drug-related suspension in two years. The reported multiple violations happened in between his first and second bans, causing the lengthier absence, per Graham (Twitter link).

Additionally, Dareus did not end up checking into rehab despite what he said in August. Instead, the 26-year-old nose tackle received treatment for attention deficit hyperactivity disorder (ADHD), according to Jarrett Bell of USA Today.

Dareus worked with an ADHD expert and a life coach, per Bell, who adds the top current Bills defensive lineman sought the counsel of the greatest defender in Bills history. Dareus stayed with Bruce Smith at his Virginia home for four days, Bell reports. Dareus was first diagnosed with ADHD while at Alabama.

“I’m a better person, a better teammate, a better player,” Dareus told Bell. “I just want to show them. Talk is cheap. I’m at the point where I have to do it.”

Dareus will return to a Bills team that’s now 2-2 despite all of the turmoil it’s encountered this season via injuries, suspensions and the firing of OC Greg Roman.

2 comments on “Latest On Marcell Dareus”