The Buccaneers have agreed to terms on a one-year deal with safety Major Wright, a source tells Adam Caplan of ESPN.com (on Twitter). The signing of Wright could be a sign that Chris Conte won’t be ready to go on Sunday. 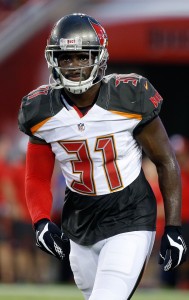 Wright was among those released by the Bucs prior to the 75-man deadline in August. Since then, he has had auditions for the Panthers and Dolphins, but neither tryout led to a deal. Today, he circles back to Tampa Bay at a time when safety help is needed.

Wright, 28, has 75 career NFL games to his credit, including 51 starts. In 2014 and 2015, he made 21 appearances for the Bucs and totaled 76 tackles with five passes defensed. Prior to that, the former third-round pick had spent his career in Chicago.

In other Bucs news, the team opted last week to bring back Charles Sims from IR. The Bucs will now monitor him in practice to confirm that he is healthy enough for live action.