The Colts placed Kendall Langford on IR after the defensive end played this season with knee pain. Indianapolis promoted cornerback Christopher Milton from its practice squad to take Langford’s place on the roster. 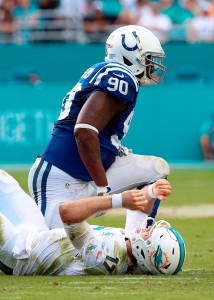 Langford functioned as the Colts’ top defensive lineman last season after signing a free agent deal earlier that year but hasn’t been the same player in 2016. The 30-year-old 3-4 end underwent offseason arthroscopic knee surgery, and although he returned in time for the Colts’ opener and played in seven games, Langford struggled to find his form. The former Dolphins and Rams talent failed to register a sack in those seven games, this coming after he recorded a career-high seven in 2015.

Chuck Pagano announced the Colts were shutting Langford down in late October. He did not return to action, so that shutdown will be an extensive maneuver.

Langford started 16 games for Indianapolis last season after being benched by the Rams a year prior. He’s under contract through the 2018 season after signing a four-year, $22MM deal last March.

The former Dolphins third-round pick all seven of the games he played this season, bringing the ninth-year veteran’s start total to 113 in his career. Indianapolis will now turn to Hassan Ridgeway and Lavar Edwards to supplement starters Henry Anderson and Arthur Jones. Anderson is also dealing with an injury and is questionable for Week 11.