For most players, a significant tear to the meniscus is a season-ender. But, as we all know, Adrian Peterson isn’t like most players. The Vikings believe that the running back can return to action next month, people with knowledge of the situation tell Tom Pelissero of USA Today Sports. 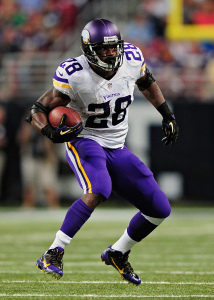 Over the next week or two, Peterson will ramp up his workload and that will give the Vikings a better handle on his timetable for return. If all goes well, we could see the veteran make a surprisingly quick comeback after suffering a “bucket handle tear” of the meniscus in September.

Peterson’s attempted return from surgery is admirable, but one has to wonder what Peterson can bring to the table this year. Before the injury, Peterson was uncharacteristically unproductive, totaling just 50 yards off of 31 carries. Jerick McKinnon and Matt Asiata have done better than that, of course, but they’re also not setting the world on fire. The Vikings added Ronnie Hillman after AD went to IR, but he didn’t do much in limited action and was sent packing earlier this week.

Of course, if Peterson can run like he did at the close of the 2015 season, he’ll provide a huge boost for the 6-4 Vikings. The Vikings face the Lions this afternoon and the winner will be in the driver’s seat of the NFC North.