The Falcons are down a defensive end and they’re exploring their options. Today, the Falcons are auditioning old friend Malliciah Goodman. 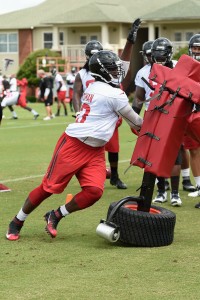 Recently, Adrian Clayborn suffered a torn MCL which will likely sideline him for the rest of the regular season and possibly longer. The 7-5 Falcons are currently using Brooks Reed at right defensive end opposite of Tyson Jackson. Behind them are Courtney Upshaw and Cliff Matthews.

If the Falcons add Goodman to the mix, they’ll have a third reserve bookend and someone who has some familiarity with the team. The Falcons selected Goodman in the fourth round of the 2013 draft. He has 34 career appearances with the Falcons spanning from 2013-2015.

In other Falcons news, the NFLPA released the figures on team spending over the last four years and found that the Falcons rank No. 13 in the NFL with roughly $550.6MM spent since 2013. Atlanta also lost top corner Desmond Trufant.