Brian Price is a wanted man and the Packers are unwilling to lose him. Green Bay has raised the defensive tackle’s practice squad salary to $26,470/week, well above the league required minimum salary of $6,900/week, Rob Demovsky of ESPN.com tweets. Price’s pay now comes out to an annual salary of $449,900, whereas the minimum comes out to $117,300 per year. 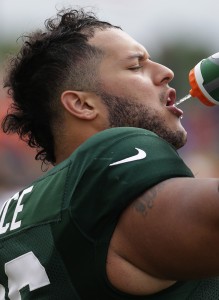 The pay bump was precipitated by the Colts trying to sign Price this week (Twitter link). Although that would have given him an opportunity to make the 53-man roster straight away, Price opted to stay with the Packers. A “few” teams have tried to sign him this year, Demovsky says.

Price, a product of University of Texas-San Antonio, made headlines for the wrong reasons in college. In the second-to-last game of the 2014 season, Price shoved an official to the ground in a fit of rage. In May, Price admitted to Tom Silverstein of the Journal Sentinel that the incident probably cost him an opportunity to hear his name called in the 2016 draft.

“I think it was definitely a red flag,” Price said. “You know, in football, tempers flare, emotions run high. It was the heat of the moment. I didn’t know it was a ref beside me, I kind of side-swiped him and it happened to be a ref and I was like, oh, I knew I messed up. I definitely feel NFL teams took note of that.”

Now that two years have passed without further incident, teams are eager to give Price a chance on the main roster.