“Despite my feelings for Trent and Chip, I felt the decision to change our football leadership was absolutely necessary,” said CEO Jed York. 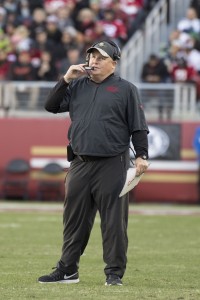 Baalke confirmed earlier Sunday that the team had let him go after a six-year run as its GM, while ESPN’s Adam Schefter reported Saturday that Kelly would also exit as part of “widespread changes” for the franchise.

Kelly, unlike Baalke, had neither a long nor remotely successful tenure with the 49ers. The offensive mind took over for the fired Jim Tomsula last winter and ultimately fared even worse than his predecessor, who guided San Francisco to a 5-11 finish in his lone year on the job. Under Kelly, the Niners amassed a paltry two wins – both of which came against the NFC West rival Rams. Kelly’s fast-paced offense was a major part of the problem, as the unit entered Sunday ranked 24th in DVOA, 27th in scoring and 29th in yardage.

Given his struggles in Philadelphia, where taking control over the roster led to his downfall, and San Francisco, it’s possible the 53-year-old Kelly’s days as an NFL coach are over. Kelly parlayed a 46-7 stretch at Oregon from 2009-12 into the Eagles’ head coaching job, which began in promising fashion. However, after back-to-back 10-win campaigns in 2013 and ’14, the Eagles sputtered to 6-9 in 2015 and let Kelly go with one week remaining in the season. He quickly landed in San Francisco, but his disastrous reign in the Bay Area leaves him with a 28-35 mark in nearly four full seasons in the pros. While Kelly denied interest in a potential return to the college ranks in October, that will likely be his next stop.

As for the 49ers, with Baalke and Kelly in the rear-view mirror, they’ll embark on an “exhaustive” search for a new GM and head coach, per FOX Sports’ Peter Schrager (Twitter link). The next regime will take over a club that’s set to pick second in this year’s draft. Further adding to the allure of both positions is that the 49ers should have upward of $85MM in cap room, as Joel Corry of CBS Sports notes (Twitter link).