Appearing on the 49ers’ pregame show today, Trent Baalke confirmed he’s been fired as the club’s general manager, accordin g to Kevin Jones of KNBR. Adam Schefter of ESPN.com reported last night that San Francisco is expected to part ways with both Baalke and head coach Chip Kelly, although Kelly has not yet been informed of his termination. 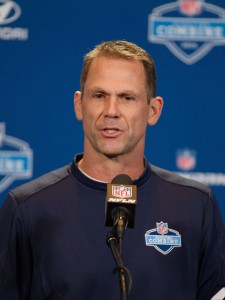 “It didn’t surprise me,” Baalke said. “We’ve done some awful good things. Some very successful seasons. Unfortunately regret we weren’t able to bring a championship to the Bay Area, which they so deserve. I think The Faithful has been great. Wish this organization nothing but the best moving forward. I do see a bright future for them.”

The Baalke-Jim Harbaugh partnership dominated during the early 2010s, rocketing the franchise to relatively similar heights to which the teams of the 1980s and ’90s soared. San Francisco glided to three straight NFC championship games, came within a Baltimore goal-line stand of winning a sixth Super Bowl title and went 36-11-1 in that three-year span. Harbaugh’s departure after a tumultuous 2014 season marked the beginning of a rapid conclusion of this freefall under the 52-year-old Baalke’s watch, with the 49ers going 7-24 in the Jim Tomsula/Kelly seasons.