Brock Osweiler To Start For Texans

Brock Osweiler will start at quarterback for the Texans in Saturday’s playoff game against the Raiders, coach Bill O’Brien announced. If Tom Savage clears concussion protocol, he’ll serve as the team’s backup. It was widely expected that Osweiler would get the start after Savage suffered a significant blow to the head. 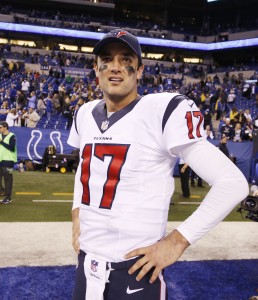 Signed to a $72MM deal this offseason, Osweiler was expected to flourish as a full-time starter. Instead, he was inconsistent at best and putrid at his worst, leading the team to make a quarterback change late in the season. Savage might not be a superstar, but he was playing much better than Osweiler in his limited sample. After suffering a concussion, the Texans really had no choice but to revert to Osweiler this weekend.

After taking over in the regular season finale, Osweiler completed 21-of-40 passes for 253 yards and a passing touchdown with no interceptions. He also added a rushing touchdown from one yard out.

4 comments on “Brock Osweiler To Start For Texans”