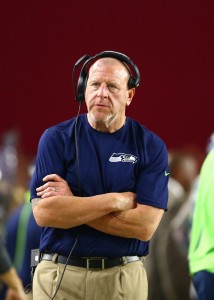 The 49ers appeared to have narrowed their hunt to three men — Shanahan, Cable, and Patriots OC Josh McDaniels — over the weekend, but the list of interested parties has quickly narrowed in recent days, as Cable’s withdraw was preceded by a similar move from McDaniels. With Shanahan now clearly San Francisco management’s choice, Shanahan will meet with the club following Atlanta’s appearance in the NFC Championship Game to discuss general manager candidates. Of course, if the Falcons lose that contest, the 49ers could immediately offer Shanahan their head coaching job.

Cable will return to his job as assistant head coach/OL in Seattle, the position he’s held since 2011. The former Raiders head coach has drawn a bit of interest during past hiring cycles, as he interviewed (and was at one point viewed as a leading contender) for the Jets vacancy in 2015.