After weeks of waiting for Atlanta’s season to end, the 49ers have finally named now-former Falcons offensive coordinator Kyle Shanahan as their 20th head coach. Shanahan, 37, will join new general manager John Lynch in receiving a six-year contract to help turn around the 49ers, who went 2-14 in 2016 and are set to pick second in this spring’s draft. 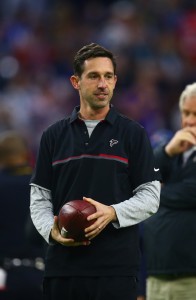 Shanahan was among eight candidates the 49ers interviewed in January to succeed the fired Chip Kelly, and he became the runaway favorite for the job three weeks ago. His emergence as a shoo-in came after Patriots offensive coordinator Josh McDaniels and Seahawks offensive line coach Tom Cable withdrew from consideration.

Monday was the first day the 49ers could officially hire Shanahan, whose prolific offense led the Falcons to an 11-5, NFC South-winning regular-season mark, two playoff victories and a berth in Sunday’s Super Bowl. The Falcons collapsed on the sport’s biggest stage, though, as they blew a 28-3 second-half lead en route to a 34-28 overtime loss to McDaniels’ Patriots. Shanahan’s aggressive decisions in the fourth quarter, when the Falcons seemingly had a victory all but locked up, have since come under fire.

Despite his gaffes in Super Bowl LI, Shanahan is unquestionably among the NFL’s brightest offensive minds and is now parlaying his five-year career as a coordinator with the Texans, Redskins, Browns and Falcons into a head coaching position. Shanahan will have more responsibility than most neophytes, as he’ll have final say over the 49ers’ 53-man roster. His most important roster-related task this offseason will be helping the 49ers find a quarterback to replace Colin Kaepernick, whose tenure with the team is set to conclude.

Shanahan has long been a fan of Redskins standout Kirk Cousins, having coached him in Washington, and could pursue him either via trade or free agency in the coming months. Otherwise, Shanahan’s Plan B is reportedly Patriots backup Jimmy Garoppolo, who’s a trade candidate. If he and Lynch aren’t able to nab either of those two, they could turn to a veteran stopgap like Falcons reserve Matt Schaub and search for a younger option to become the franchise’s long-term solution.

The 49ers will have the means to make upgrades under center and elsewhere this offseason, as they lead the NFC in cap space (upward of $80MM, including the soon-to-be gone Kaepernick) and possess three of the draft’s first 66 picks. In the meantime, Shanahan will get to work on assembling a coaching staff. Given that all other newly named head coaches landed their positions well before Shanahan, he could be at a disadvantage in finding assistants.