The Vikings announced that they are declining Adrian Peterson‘s option for the coming season. The move has been long expected. 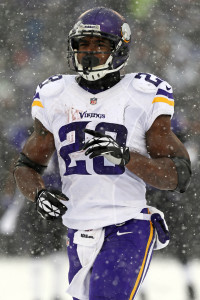 Peterson’s option was worth $18MM for the 2017 season and there was no chance of the Vikings picking that up. Now that this formality is out of the way, the Vikings will work to re-sign Peterson on a cheaper deal. However, the veteran will probably first explore his options and determine his value.

Ian Rapoport of NFL.com (on Twitter) hears that Cowboys owner Jerry Jones would pursue Peterson if he is available. Still, AP might prefer to explore teams that are in need of a true No. 1 RB. Whether Dallas is in the cards remains to be seen, but Jeremy Fowler of ESPN.com (on Twitter) hears that his strong preference will be to play alongside an established quarterback.

In 2016, Peterson suffered an unfortunate meniscus injury in Week 2 and racked up a meager 72 yards on 37 carries. In the year before that, however, he exploded for 1,485 rushing yards and eleven touchdowns. Even with questions about his age and injury concerns, Peterson remains an intriguing option for teams in need of rushing help.