The Chiefs are likely to pass on quarterback Nick Foles‘ option for 2017, sources tell Mike Garafolo of NFL.com (on Twitter). Interestingly, Garafolo hears that the option would have paid Foles $6.4MM rather than the $10.4MM figure that was reported by many outlets. 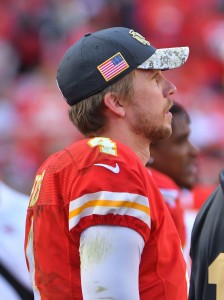 Foles will now enter the free agent market at a time when several teams are desperate for answers at quarterback. The veteran may not be an inspiring option, but he could be an affordable placeholder for clubs that are not inspired by this year’s crop of signal callers in free agency or the draft. At minimum, Foles can find a home as an experienced No. 2 QB, but he’ll almost certainly earn less than $6.4MM in 2017.

Last year, Foles appeared in three games and got one start while Alex Smith was banged up. In that limited sample, he completed 65.5% of his passes while throwing three touchdowns and zero interceptions. Foles had his breakout year in 2013 under Chip Kelly in Philadelphia but he has yet to repeat that success. In between the Eagles and Chiefs, Foles spent 2015 with the Rams, a season he’d like to forget.

The Chiefs now have two QBs on the roster in Smith and Tyler Bray. It would not be surprising to see them pursue a more experienced backup QB this offseason.