We have another notable release in Miami. The Dolphins are cutting defensive tackle Earl Mitchell, Mike Garafolo of NFL.com tweets. Mitchell was due $4MM this upcoming season. Instead, his contract will leave just $500K in dead money. 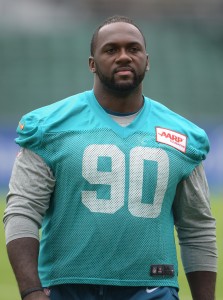 Mitchell was said to have “internal support” within the Dolphins front office, but his fan club was not large enough to keep him in South Florida. After missing half the season with a calf injury, Mitchell only ended up playing one-quarter of Miami’s defensive snaps. Apparently, the Dolphins feel that they can acquire defensive line depth elsewhere for cheaper.

Mitchell, 30 in September, left the Texans in free agency to sign with the Dolphins prior to the 2014 season. The defensive tackle received a four-year, $19MM deal with $8MM guaranteed, thanks in large part to his work ethic and leadership skills. In his first year as a Dolphin, Mitchell was a highly-valued sub as he notched 33 total tackles and 2.0 sacks. In the last two seasons, however, his production has noticeably dipped.