Steelers In Talks With Brown, Timmons 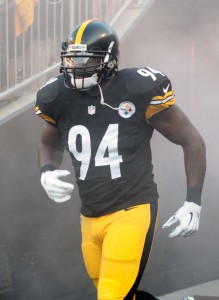 Unlike Brown, who has another year on his contract, the Steelers are in imminent danger of losing Timmons. The soon-to-be 31-year-old could depart the organization via free agency as early as next month, but Pittsburgh clearly wants to re-sign the longtime stalwart.

Timmons is fresh off his 10th NFL season, all of which have been spent in Pittsburgh, and continued to fill the stat sheet with 114 tackles, 2.5 sacks, two interceptions and a forced fumble in his sixth straight 16-start season. Timmons, who hasn’t missed a game since 2009, also played 92.9 percent of the Steelers’ defensive snaps, though Pro Football Focus wasn’t impressed with his work. The site placed him just 70th in overall performance among 87 qualified linebackers.

On the other hand, there’s no arguing with Brown’s production. The 28-year-old is arguably the league’s top receiver, having earned his third consecutive first-team All-Pro nod in 2016. Brown has matched or exceeded 100 catches, 1,200 yards and eight touchdowns in each of the past four seasons, and he could become the league’s highest-paid wideout as a result. He’s due to make $4.71MM salary and count $13.618MM against the Steelers’ cap in the final year of his contract in 2017, but there’s optimism he and the club will hammer out a new deal before training camp. Unsurprisingly, then, Pittsburgh has told rival teams that it’s not making Brown available via trade.