The latest polarizing free agent likely set to cash in due to the quarterback position’s supply-and-demand state, Mike Glennon could have an effect on how the player many perceive as the game’s best passer proceeds. Seeing Glennon in line to sign for as much as $15MM per year, Aaron Rodgers said that situation “has to” lead to a revisiting of his own deal with the Packers, per Jason Wilde of ESPNWisconsin.com (on Twitter). Rodgers, though, downplayed this perceived desire for a pay bump (via Twitter). 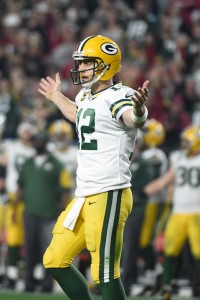 Rodgers is no longer the league’s highest-paid signal-caller, with Andrew Luck now occupying that status. In fact, Rodgers’ $22MM-per-year setup has slunk to fourth on this list in terms of AAV — also behind Drew Brees and Joe Flacco. The 33-year-old perennial MVP candidate is signed through the 2019 season and will count $20.3MM, $20.9MM and $21.1MM in those years.

However, several other quarterbacks look to be in line to surpass Rodgers’ salary via likely 2017 extensions. Matt Ryan, Matthew Stafford and Derek Carr, and possibly Kirk Cousins, figure to sign for more than $22MM per year. Rodgers could be reacting to this as much as Glennon being set to follow in Brock Osweiler‘s footsteps.

Rodgers signed his five-year, $110MM extension in 2013. He bounced back from a substandard (for him) year by leading the NFL with 40 touchdown passes and guiding the Packers to their eighth straight playoff berth after the team began the season 4-6. The longtime starter’s virtuoso playoff work led the Packers past the Giants and Cowboys in January.

Going into the 2017 season, Rodgers figures to have several years left to contribute to Green Bay’s championship cause. He discussed playing into his 40s early during the 2016 season, which was the former first-rounder’s 12th in the league. Among active quarterbacks, Rodgers’ two MVPs are also tied with Tom Brady — in six fewer seasons as a full-time starter — for most in football, so he figures to have a case for a raise should he bring this up to Packers management.

8 comments on “Aaron Rodgers To Push For New Deal?”