Brandon Marshall doesn’t have to go house shopping. The wide receiver has struck agreement with the Giants on a two-year deal, Adam Schefter of ESPN.com tweets. It’s a two-year, $12MM deal for Marshall (Twitter link). Marshall tweeted a picture of the signed contract, so it’s now official. 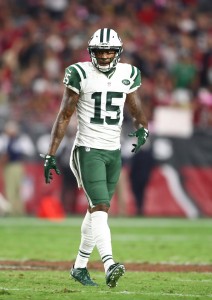 The Giants have been linked to Marshall ever since the Jets released him earlier this month. He’ll now line up opposite of Odell Beckham Jr. and give defenses something to think about before they double team the young superstar. The Giants’ WR depth chart is looking pretty strong at the moment with OBJ, Marshall, and rising sophomore Sterling Shepard in the top three slots.

Marshall is just two years removed from a season in which he had 109 catches, 1,502 yards, and 14 touchdowns. His numbers dipped significantly last season, but that can be largely attributed to the Jets’ overall offensive quagmire. Now, he could be reinvigorated as he switches jerseys in the same building.

Marshall not only avoids the hassle of moving by signing with the G-Men – he’ll also get to stay in the country’s No. 1 media market. The charismatic veteran already does a fair amount of TV work and he hopes to continue in broadcasting after he’s done playing.

After being released, I ranked Marshall as the sixth-best wide receiver available in free agency, behind Alshon Jeffery, Terrelle Pryor, Kenny Stills, Kenny Britt, and DeSean Jackson. That position slotted him ahead of notables like Pierre Garcon, Torrey Smith, and Terrance Williams.