With the newly signed Latavius Murray set to occupy their backfield, the Vikings have closed the door on the possibility of re-signing Adrian Peterson, general manager Rick Spielman announced Thursday (Twitter link via the team).

The fact that the Vikings are moving on from Peterson comes as no surprise in the wake of the Murray acquisition. However, after the Vikings declined Peterson’s $18MM option in February, it seemed possible they’d bring him back at a far more reasonable figure. Instead, the club didn’t make the soon-to-be 32-year-old an offer. 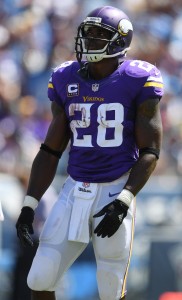 Peterson will go down as one of the greatest Vikings ever, having earned seven Pro Bowls trips, five first-team All-Pro nods and an MVP (2013) since they selected him in the first round of the 2007 draft. He’ll depart Minnesota 16th on the all-time rushing list (11,747), 10th in rushing touchdowns (97) and third in yards-per-carry average (4.9), though he no longer possesses the sparkling reputation he had when he entered the league.

Peterson’s character took a hit in 2014, when he violated the league’s personal conduct policy in an incident of abusive discipline toward his then-4-year-old son. Peterson missed 15 of 16 games that season as a result, but he bounced back in 2015 to win the league’s rushing title. Unfortunately for Peterson, 2016 represented another step backward. Thanks to the meniscus tear he suffered last September, Peterson appeared in just three games and totaled a mere 37 carries in his final year as a Viking.

Now, on account of his age, the injury and his paltry 1.9 YPC last season, Peterson is having difficulty finding work in free agency. Several rumored suitors – the Texans, Patriots, Raiders, Giants – have shown little to no interest in Peterson, while the Seahawks visited with him but then opted to sign Eddie Lacy instead. Peterson will undoubtedly land somewhere in the coming months, but it’s obvious things haven’t broken his way since the Vikings declined his option.