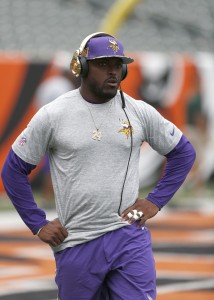 The newest member of the Panthers, wide receiver Charles Johnson, revealed Friday that he bumped into Munnerlyn at the team’s facilities, per David Newton of ESPN.com. Munnerlyn told Chris Tomasson of the St. Paul Pioneer Press (Twitter link) earlier today that he’d probably sign a new deal by the end of Friday.

Munnerlyn is now signed up for his second stint with the organization. The Panthers selected Munnerlyn in the seventh round of the 2009 draft, and he stuck with them through the 2013 season. Munnerlyn spent the previous three seasons as Johnson’s teammate in Minnesota.

Munnerlyn, who ranked as PFR’s No. 11 free agent corner, is strictly a slot man, but he’s an excellent one. Carolina finished 11th in pass defense DVOA last year even after losing Josh Norman, and Munnerlyn will now team with James Bradberry and Daryl Worley in a rapidly improving unit. The Panthers already addressed their secondary earlier today, agreeing to terms with veteran safety Mike Adams.