Chris Long took to Instagram to announce that he will not be re-signing with the Patriots this offseason. The 31-year-old (32 in late March) hinted that he is looking to join a team that will give him increased playing time and a more prominent role. 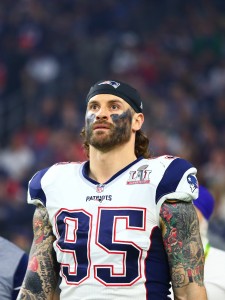 “This has zero to do with money, etc,” Long wrote. “It’s the right move in my heart because I want to get back to being the player I was before. I’m thankful for my role this year, but as a competitor, I’m itching to do what I do best.”

Soon after the Patriots traded Chandler Jones to the Cardinals, they added Long on a one-year, $2MM deal. After playing in just 18 regular season games in two seasons, Long appeared in every single regular season game for the Pats. His season was capped off with a Super Bowl win, but he might not have been satisfied with his amount of burn in the postseason.

Now that Long is out of the picture, the Patriots could look to add a defensive end like Jared Odrick. Odrick met with the Pats recently and passed their physical.