Connor Barwin will meet with the Rams on Wednesday, a person with knowledge of the situation tells Gary Klein of the Los Angeles Times (on Twitter). This marks the veteran’s second free agent trip since being released by the Eagles earlier this month. Earlier this week, he met with the Bengals, but he left Cincinnati without a deal. 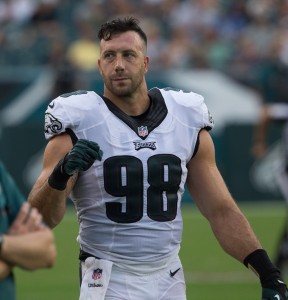 The Rams will be running a 3-4 scheme under new defensive coordinator Wade Phillips, and that could be a good fit for Barwin. Days ago, the Rams jettisoned William Hayes to the Dolphins because he was not an ideal fit for their gameplan. Barwin could come in and start opposite of Aaron Donald with Michael Brockers in the middle.

The 30-year-old was in the midst of a six-year, $36MM contract when the Eagles released him last week. Last season, Barwin racked up 34 tackles, five sacks, and one forced fumble. He also appeared in every single regular season game for the sixth consecutive season. Those numbers all sound good, but the advanced metrics aren’t so high on him. Barwin graded out as just the No. 100 edge defender in the NFL last year out of 109 qualified players, per Pro Football Focus. He had respectable overall scores with Philly in 2013 and 2014 (76.2, 78.5), but he has dipped in the last two seasons with scores of 50.8 and 42.1.