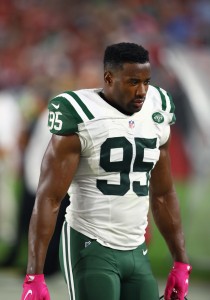 The 25-year-old Martin is coming off his first season as a member of the Jets, with whom he totaled a career-high 15 appearances. While Martin was barely a factor on defense, having registered just one tackle and a half-sack, he was a key special teams cog. Martin took part in 76.9 percent of the Jets’ ST snaps.

Before joining the Jets last year, Martin divided his first three seasons between the Chiefs and Buccaneers. He originally signed with Kansas City as an undrafted free agent from Columbia University in 2013.