The Dolphins are looking to lock up their top linebacker, restricted free agent Kiko Alonso, but they’ll need to add outside help to the group even if they keep him in the fold. With that in mind, the Dolphins have interest in impending free agent Lawrence Timmons and will meet with him sometime after the new league year opens, reports Jeremy Fowler of ESPN.com. 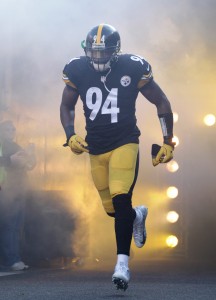 Timmons, 31 in May, has spent the first 10 years of his career with the Steelers, who would like to retain him. It appears he’ll test the open market, though, and could return to Florida, where he starred as a college player at Florida State. Timmons parlayed his Seminoles career into first-round status in 2007 and has since racked up six 100-tackle seasons – including five in a row since 2012 – to go with 35.5 sacks, 14 forced fumbles and 12 interceptions. He has also been eminently durable, having appeared in fewer than 16 regular-season games just once – during a 14-game 2014 – and hasn’t missed a start since 2010.

In his latest action in 2016, Timmons played 92.9 percent of the Steelers’ snaps and piled up 114 tackles, 2.5 sacks, two picks and a forced fumble, though Pro Football Focus wasn’t impressed with his work. The site placed him just 70th in overall performance among 87 qualified linebackers. Nevertheless, given his careerlong production and durability, Timmons won’t have difficulty landing a contract this offseason. PFR’s Dallas Robinson ranks him as the fifth-best linebacker in this year’s class of free agents.