The Ravens are trying to keep soon-to-be free agent right tackle Ricky Wagner from hitting the open market. Should their efforts fail, the Vikings are among the teams with Wagner on their “radar,” Darren Wolfson of 5 Eyewitness News hears (Twitter link). 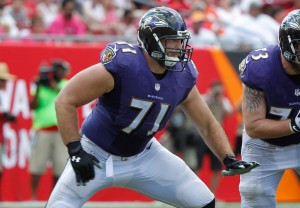 With the Bengals’ Andrew Whitworth unlikely to sign elsewhere, per Paul Dehner Jr. of the Cincinnati Enquirer (via Twitter), Wagner could end up as the most appealing bookend available. The 27-year-old Wagner is coming off his third season with at least 14 starts, and he ranked as Pro Football Focus’ 18th-best tackle among 78 qualifiers in 2016.

Given Wagner’s track record, his price tag will be high – perhaps around $10MM per year – but the Vikings have a good amount of spending room and gaping holes along their offensive line. Thus, it’s no surprise that Wagner’s on the Vikings’ list as free agency nears, and general manager Rick Spielman indicated Wednesday that the team could be aggressive on the market.

“I think we can go out and attack some of this,” he said (via Matt Vensel of the Star Tribune). “We have the flexibility to do that with the money that we’ve cleared up over the last couple of weeks.”

Minnesota’s O-line finished the season as Football Outsiders’ 30th-ranked group after clearing the way for an NFL-low 3.2 yards-per-carry average and allowing the league’s 10th-most sacks (38). Injuries were a major part of the problem, particularly at tackle, as Matt Kalil, Andre Smith and Jake Long missed most of the year. All three of those players are set to become free agents, leaving the Vikings without an obvious solution at either tackle spot.