Eddie Lacy is going to Seattle. The Seahawks and the running back have agreed to a one-year, $5.5MM deal with $3MM fully guaranteed, according to Adam Schefter of ESPN.com (on Twitter). 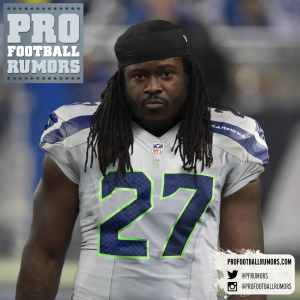 Lacy now joins a running back group that already features C.J. Prosise and Thomas Rawls. Presumably, Lacy will be at the top of the order and receive the bulk of the carries. Now, the Seahawks will likely move away from other free agent RB targets like Latavius Murray and Jamaal Charles.

Even though Lacy has had problems with consistency and conditioning over the years, he was my top-ranked running back in this year’s free agent crop. The Packers were interested in retaining Lacy, but they apparently didn’t offer him much money to stay. The Vikings were also in the mix. The Vikings may now circle back to Adrian Peterson and, speculatively, I wonder if this could spark the Packers to also get involved with No. 28.

The ex-Alabama star averaged a so-so 4.1 yards per rush and posted a career-low three touchdowns in 187 carries in 2015. Last year, he was averaging 5.1 YPC through five games before an ankle injury ended his season. If healthy, Lacy could be one of the league’s very best rushers. He could then parlay that into a lucrative multi-year deal next year.

The running back market has been slow to develop this year and Lacy’s deal might finally get the ball rolling. So far, only Lacy and a few other backs on PFR’s top 10 list of free agent RBs have come off the board.