Veteran running back Tim Hightower has found a new home. The 30-year-old free agent has signed with the 49ers, general manager John Lynch announced on Twitter. We learned in mid-March that Hightower had taken a meeting with the organization. 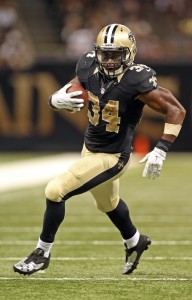 The veteran had spent the past two seasons serving primarily as Mark Ingram‘s backup on the Saints. 2016 was a bounce-back season for the former fifth-rounder, as he appeared in all 16 games for the first time since 2010. He finished the campaign with 548 yards and four touchdowns on 133 attempts, and he added another 22 receptions for 200 yards and one score.

Hightower was effectively out of the NFL between 2012 and 2015. Prior to that, he was a dependable option in the Cardinals offense. In 2010, the running back finished the season with a career-high 736 rushing yards. During his rookie campaign, Hightower rushed for an equally-impressive 10 touchdowns.

Hightower will be joining a 49ers running back corps that currently features Carlos Hyde, DuJuan Harris, Mike Davis, and Raheem Mostert. Hightower was listed as the fifth-best running back in our recent positional free agent rankings. The Redskins were among the teams to also reach out to the veteran.