Veteran guard Brandon Fusco is on his way to San Francisco and is expected to sign with the 49ers, a source tells Ian Rapoport of NFL.com (on Twitter). The former Minnesota offensive lineman will serve as interior depth. 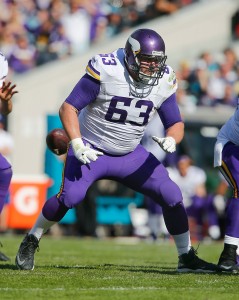 Fusco, 29 this summer, appeared in 14 games for Minnesota in 2016 and started in each of those contests. He visited the Patriots in late April, but he ultimately found his match with the Niners.

The Niners have shaken things up a bit on the offensive line this offseason after trading for center Jeremy Zuttah and signing former Seahawks tackle Garry Gilliam. The Fusco signing makes sense for SF after no offensive linemen were selected with the team’s ten picks last week.

Last year, Fusco had one of the worst scores of any qualified guard in the league last year, per Pro Football Focus. His only quality season, according to PFF, came in 2013 when he made 15 starts at right guard for Minnesota.