The Cowboys have agreed to a deal with their first-round pick, former Michigan defensive end Taco Charlton, per Clarence Hill of the Star Telegram (Twitter link). 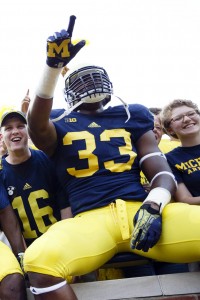 Charlton saw action in all four of his years with the Wolverines, and he was particularly effective last season in racking up personal bests in tackles (40), tackles for loss (13.5) and sacks (10). That production helped convince the Cowboys to use the 28th pick on Charlton, who’s set to make over $10MM in guarantees – including $5.43MM-plus via signing bonus – on his rookie contract.

While the Cowboys went an NFC-best 13-3 last year, they did it without an elite pass rush, ranking a decent 13th in sacks and a below-average 26th in quarterback hurries. No one on the team finished with more than six sacks, leading owner Jerry Jones to make it clear early in the offseason that upgrading the pass rush was in order. The Cowboys’ hope is that Charlton will do that, while further defensive help could come from second- and third-round cornerbacks Chidobe Awuzie and Jourdan Lewis. They’re among eight unsigned Cowboys draft picks, with Charlton being the only member of their class with a contract.