The Chiefs released linebacker Khaseem Greene on Tuesday for reasons that weren’t entirely related to football. The Rutgers product was indicted on weapons charges for an incident that went down in December in Elizabeth, New Jersey, as Marisa Iati of NJ.com writes. 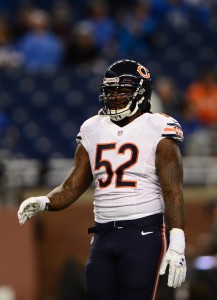 Prosecutors found surveillance video of Greene, 28, handing a gun to someone outside of a nightclub on December 3, moments before that person fired a gun into a crowd of people. That man, Jason C. Sanders, gave a statement to authorities in which he confessed that Greene handed him the firearm.

Greene was a fourth round pick of the Bears in 2013, but his time in Chicago didn’t last long. After 25 games in two years for the Bears, he bounced around the league and spent time with the Bucs and Lions before signing a futures contract with the Chiefs in January. Even before the indictment, he was far from a lock to make KC’s 53-man roster. If he cannot clear his name in court, it might be a while before we see him in camp with another team.