Jeremy Maclin‘s visit to the Bills wound up spanning two days, but it won’t keep him from meeting with the Ravens. The free agent is leaving Buffalo and heading to Baltimore, according to ESPN.com’s Adam Schefter (on Twitter). 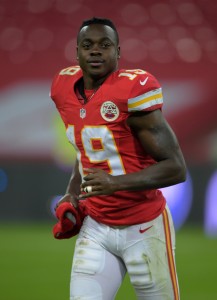 Maclin could still sign with the Bills, as far as we know, but he does not have a deal with them at this time. That leaves the door open for the Ravens to swoop in and potentially land him this week. The Eagles and Browns are also among the clubs said to have interest in the 29-year-old.

The Ravens have Mike Wallace, Breshad Perriman, Chris Moore, and Michael Campanaro as their top receivers following the retirement of Steve Smith. Because Baltimore did not address the position in the draft, a veteran addition like Maclin would make tons of sense for the team and the need to add a weapon for Joe Flacco has only been amplified by Dennis Pitta‘s injury/release.

If the Ravens cannot get a deal done with Maclin, they could explore a potential deal for Jets receiver Eric Decker. The Jets have already called the Ravens about a swap.

One comment on “Jeremy Maclin Heads To Ravens Visit”