The Jets say they’ll trade or release Eric Decker before the week is through. With that in mind, they’re reaching out to clubs to try and get something for the veteran and the Ravens are among those teams, Jason La Canfora of CBSSports.com (on Twitter). 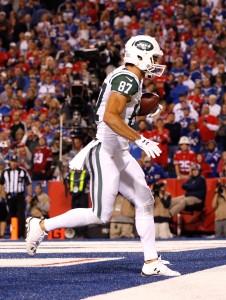 The Ravens’ level of interest in acquiring Decker via trade is not immediately clear. From a football perspective, Decker would make plenty of sense for the Ravens after they lost Steve Smith to retirement and did not select a wide receiver in this year’s draft. However, the Ravens might not want to take on the two years remaining on his five-year, $36.25MM contract. In theory, the Ravens could wait things out and try to land Decker as a free agent if he is released.

Decker, 30, had 154 catches, 1,989 yards, and 17 touchdowns in his first two seasons with the Jets. Unfortunately, he missed the majority of 2016 due to injury. Now that he’s healthy, Decker is looking to get back to his old form with another team.

The Ravens project to have Mike Wallace, Breshad Perriman, Chris Moore, and Michael Campanaro as their top receivers in the fall.