The Eagles aren’t cutting Allen Barbre after all. Upon learning that the Eagles were planning to release the veteran guard, the Broncos reached out to the Eagles to work out a trade. A deal has been agreed upon, with Philly sending Barbre to Denver in exchange for a 2019 conditional draft pick (Twitter link via Ian Rapoport of NFL.com). It’s a conditional seventh-rounder, tweets Mike Klis of 9News. 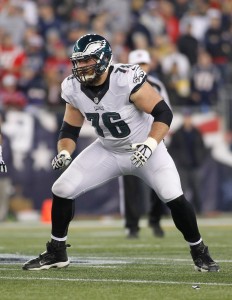 The Broncos already made one major upgrade on the interior line this offseason by signing former Cowboy Ronald Leary. Barbre could now compete with Max Garcia for the other starting guard spot or potentially push Menelik Watson at right tackle. Alternatively, he could be the Broncos’ super sub, filling in where needed at four different positions.

In Barbre, Denver gets a player with 76 appearances and 36 starts on his resume. The 33-year-old has started all 28 of his appearances dating back to 2015, including 12 last season, when he ranked an excellent 16th among Pro Football Focus’ 73 qualified guards. Barbre will earn $2.05MM this year and will have a chance at another $300K in playing time incentives, according to Klis (Twitter link).

The cap implications did not change for the Eagles when they flipped from releasing Barbre outright to trading him. After the deal, the Eagles will still save $2.1MM in cap space while leaving $500K on the books in dead money.