The Bills sure love to make trades. On Monday, the Bills shipped linebacker Reggie Ragland to the Chiefs for a 2019 fourth-round draft pick, according to an announcement from Kansas City. 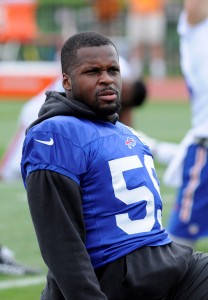 Ragland, a 2016 second-round pick made by the Doug Whaley regime, was fighting for a roster spot this summer. The 23-year-old missed the entirety of his rookie campaign with an ACL injury and has yet to see live NFL action.

The Bills are not only under new leadership, but they also have an entirely different defensive scheme. Rex Ryan‘s 3-4 is gone and has been replaced with Sean McDermott‘s 4-3. Ragland, apparently, was not a fit for Buffalo’s new-look D, but he could find a home in KC’s 3-4.

The Bills traded up to take the Alabama product in 2016, giving up a second-rounder (49th overall), fourth-rounder (117th overall), and a future fourth-rounder for the 41st-overall pick. Between the 2014 and 2015 seasons, Ragland racked up 195 tackles, 17 tackles for loss, and four sacks.

Assuming he cracks the 53-man roster, Ragland will serve as support for Chiefs starting inside linebackers Ramik Wilson and Derrick Johnson.

Ragland is the latest Bills player to be traded, following the path of wide receiver Sammy Watkins, cornerback Ronald Darby, and quarterback Cardale Jones. Between these swaps and their draft day deal with the Chiefs, the Bills now have an impressive stockpile of future selections, including the Chiefs’ 2018 first round pick, the Rams’ 2018 second round pick, the Eagles’ 2018 third round pick, and the Chiefs’ 2019 fourth round pick.