Broncos To Cut Ward If They Can’t Trade Him

One way or another, the Broncos are about to show T.J. Ward the door. If the Broncos can’t find a suitable trade for the safety by Saturday afternoon’s roster deadline, they’re expected to release him outright, Mike Klis of 9News hears. 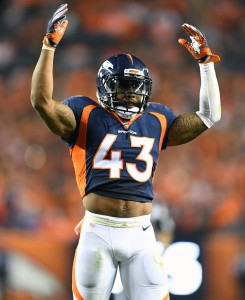 By cutting Ward, the Broncos would take themselves off the hook for his non-guaranteed $4.5MM salary. If Ward’s salary comes off the books, the Broncos may redirect that money towards extensions for kicker Brandon McManus and linebacker Todd Davis, Klis writes.

The Broncos can afford to keep Ward, but they would prefer to give a starting opportunity to sophomore Justin Simmons after his strong showing this summer. While Simmons has soared, Ward has been sidelined with a nagging hamstring injury throughout the preseason.