The Browns have traded offensive lineman Cameron Erving to the Chiefs for a fifth-round pick in 2018, per Ian Rapoport of NFL.com (Twitter link). Cleveland placed Erving on the block after he lost the starting right tackle job to second-year man Shon Coleman. 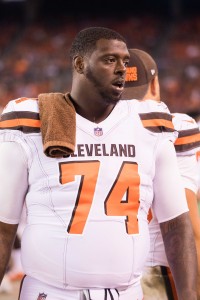 Erving goes down as a failed first-round pick for the Browns, who selected the former Florida State standout 19th overall in 2015. He was unable to establish himself either at tackle or along the interior of the line in Cleveland, which tried Erving at both guard and center. To his credit, the 25-year-old Erving has been durable to this point, having appeared in 29 of a possible 32 regular-season games. He started in all 13 of his appearances last season, though Pro Football Focus ranked him among the game’s worst centers.

For the Chiefs, who acquired another recent high pick – 2016 second-round linebacker Reggie Ragland – in a deal with the Bills earlier this week, Erving represents a talented reclamation project. If he breaks out over the next two seasons, the Chiefs will have the ability to control Erving through 2019 by way of a fifth-year option.

In the near term, playing time looks as if it will be difficult to come by for Erving in Kansas City. The Chiefs have five set starters along the line in tackles Eric Fisher and Mitchell Schwartz, guards Laurent Duvernay-Tardif and Bryan Witzmann and center Mitch Morse, though injuries during the season should create opportunities for the team to plug in Erving.