Rams defensive lineman Dominique Easley has suffered another a torn ACL, Ian Rapoport of NFL.com tweets. He will be out for the 2017 season and placed on injured reserve. 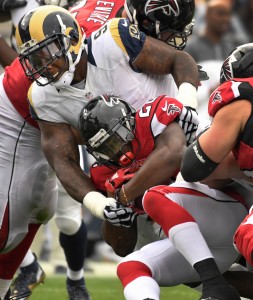 [RELATED: Rams DT Aaron Donald Does Not Report To Camp]

Easley was carted off the field during practice on Tuesday and a Wednesday morning MRI has confirmed the team’s worst fears. It’s an awful blow for Easley on a personal level as he had seasons cut short in both 2011 and 2013 after suffering torn ACLs. It’s typically challenging to come back from one ACL tear. Returning after three separate ACL tears will be a trying feat for the 25-year-old.

Waived after only two seasons with the Patriots, Easley found a home with the Rams last year. He turned in a strong 2016 as he recorded 3.5 sacks and finished out as the league’s No. 30 interior defender among 125 qualifiers, per Pro Football Focus. This year, the Rams were planning to give him an increased workload. Now, they’ll have to look elsewhere for reinforcements on the defensive line.