The Steelers are expected to sign cornerback Joe Haden to a three-year, $27MM deal that includes $7MM in 2017, per Adam Schefter of ESPN.com (Twitter link). That $7MM figure also represents the contract’s guarantee, according to Ian Rapoport of NFL.com (Twitter link). 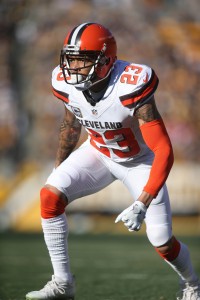 Haden will stay in the AFC North and land with Pittsburgh despite receiving larger offers from other clubs, tweets Schefter, who adds that Haden wanted to be a Steeler. A number of other teams, including the Dolphins, Eagles, Saints, Chiefs, Cowboys, and 49ers also expressed interest in Haden, but the Pittsburgh had been considered the favorite to ink the former Browns cornerback.

The Steelers ranked 12th in DVOA against the pass a season ago, but the club’s secondary was still missing a clear-cut No. 1 cornerback. It’s not clear that Haden fits that definition anymore, as he graded as the No. 88 corner among 110 qualifiers in 2016, per Pro Football Focus. Injuries were likely a factor in his decreased production, but health isn’t a guarantee for Haden, who’s missed 14 games over the past two seasons.

Before releasing him earlier today, Cleveland offered to reduce Haden’s pay from $11MM to $7MM, per Rapoport (Twitter link), and Haden will now earn that same total with the Steelers. Haden’s deal contained offset language, so the Browns are not on the hook for the $4MM in guaranteed base salary it owes to the 28-year-old cornerback.