The Texans have claimed Andre Ellington off waivers, according to Ian Rapoport of NFL.com (on Twitter). The Cardinals released the running back on Monday, giving the league’s other 31 teams a chance to snag him. 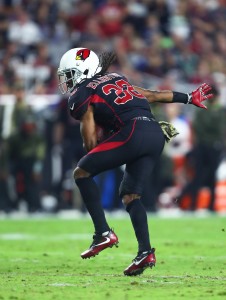 Ellington will help provide depth to a badly depleted group in Houston. Rookie D’Onta Foreman landed on injured reserve this week with a torn Achilles, joining Tyler Ervin (knee). Meanwhile, Alfred Blue‘s status is unclear due to a lingering hamstring injury. Ellington will slot in as one of three fully healthy backs along with starter Lamar Miller and reserve Jordan Todman.

Ellington, cousin of Texans wide receiver Bruce Ellington, had just 15 carries for 53 yards before his release from Arizona. He did, however, have 33 receptions for 297 yards. He could prove to be a nice complement to Miller, even if he’s not as effective of a runner as he once was. In his first two NFL seasons, Ellington ran for 1,312 yards on 319 carries and caught 85 passes for 766 yards.

The 4-6 Texans were No. 8 in line to claim Ellington based on the inverse of the standings. This means the Browns, 49ers, Giants, Bears, Broncos, Colts, and Bengals all passed on claiming the 28-year-old.