While we’re more than a year and a half removed from the 2016 draft, one team’s actions continue to be discussed. And considering what could happen to the Browns’ power structure at the end of this season, their recent draft decisions could end up being seminal choices. 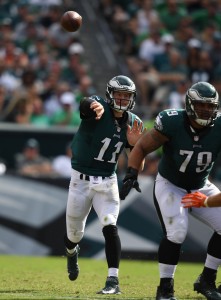 The Browns have passed on multiple players who look like long-term quarterback solutions in Carson Wentz and Deshaun Watson, but in Hue Jackson‘s first months in Cleveland, he had his eye on Wentz.

Mary Kay Cabot of cleveland.com reports Jackson actually preferred Wentz to Jared Goff. This runs contrary to previous reports that indicated he (and veteran Browns scouts dismissed before the draft) liked the current Rams passer prior to his team’s trade-down decision.

Jackson’s pro-Goff vibe stemmed from a close-to-the-vest mindset, Cabot notes. He worked out Goff privately but was the only head coach to attend Wentz’s pro day. Wentz assumed the Browns were going to draft him, per Cabot, after he and Jackson developed a strong rapport before the draft.

The private workout he and then-assistant Pep Hamilton conducted with Wentz had the duo “instantly sold” Wentz was the Browns’ quarterback of the future. The Browns, of course, traded that pick to the Eagles for a bounty of draft picks. Cabot reports Browns management wasn’t going to be dissuaded from unloading that No. 2 selection because of the myriad needs their team had, and the Eagles aren’t regretting their decision.

When the Browns and Eagles faced off in the 2016 opener, Cabot reports Jackson felt he received a “chilly” reception from Wentz because of the draft snub and Paul DePodesta‘s infamous not-a-top-20-QB comment. Cabot also reports part of the reason Hamilton left Cleveland for Michigan after one season is how far off the Browns were on their evaluations on that 2016 quarterback class.

This would not be the only time Jackson didn’t get his way regarding a quarterback during his eventful stay in northeast Ohio.

Trade targets Jimmy Garoppolo and A.J. McCarron fell through, the latter in an embarrassing snafu. Cleveland is 0-11 and contemplating major changes this offseason, and Jackson is said to want more decision-making power if he returns in 2018.