On Wednesday morning, Bengals coach Marvin Lewis confirmed that defensive coordinator Paul Guenther will interview with the Raiders for their defensive coordinator job under a yet-to-be-named head coach (whom we’re pretty sure is Jon Gruden). However, Lewis says the Bengals hope to have a chance to bring him back, as Ian Rapoport of NFL.com tweets. 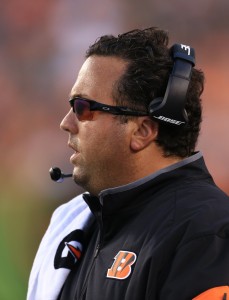 It was previously reported that Guenther would be leaving the Bengals, but there’s apparently interest in keeping him on board. Guenther is a free agent, so he is free to pursue opportunities with the Raiders, Redskins, or any other team looking for a DC.

It appears that both Gruden brothers have their eye on Guenther. Redskins head coach Jay Gruden worked with Guenther in Cincinnati and tried to lure him to D.C. a season ago before the Bengals blocked his request. Clearly, Jon also took notice of his work.

If the Bengals and Lewis parted ways this offseason – as was rumored for weeks – it was said that Guenther would have been a strong internal candidate to take over as head coach. That opportunity is no longer on the table, so Guenther could be looking for a change of scenery. In the coming days, we’ll find out whether Lewis’ own lengthy history with Guenther can persuade him to stay.

One comment on “Bengals Want To Keep DC Paul Guenther”