Buccaneers safety T.J. Ward was arrested on Wednesday on a misdemeanor court of possession of marijuana (Twitter link via Greg Auman of the Tampa Bay Times). Ward is already out of jail on bond. 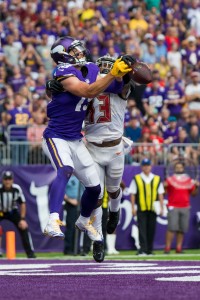 Ward’s agent, Josh Arnold has now released a statement, which conflicts with the original report regarding Ward’s arrest (via Albert Breer of Sports Illustarted on Twitter).

“Reports from various sources revolving around my client, T.J. Ward, and an incident nearly 3 months ago are inaccurate. We dispute the claims being reported and TJ adamantly denies these allegations. IT was our understanding that the matter had been resolved in October and my client was never arrested at that time. Nor was he even at the residence when the police allegedly located marijuana. TJ never received a notice to appear or any other otice of a court date regarding this matter in October or subsequently thereafter. TJ is uncertain as to why this coming up now given the fact it was revolved months ago, but nonetheless he looks forward to resolving the issue as expeditiously as possible.”

Given the conflicting reports, we’ll have to just wait and see how this situation will unfold.

Nonetheless, the news comes at a particularly bad time since Ward is scheduled for free agency in March. This isn’t a particularly serious charge, but GMs won’t be thrilled about this in light of his 2014 assault charge which was later dropped. At the time, it was alleged that Ward threw a glass mug at a strip club bartender after she told him outside drinks were not allowed. The NFL later suspended him for one game in 2015.

It should be noted that Ward was with the Broncos in early September. In Colorado, marijuana is legal for recreational purposes.

Ward’s on-field play will likely be a bigger issue as he looks for his next contract. In 12 games (five starts), Ward graded out as the No. 58 ranked safety in the NFL per Pro Football Focus’ advanced metrics. That’s a big dropoff from where he was from 2013-2015 when he made three straight Pro Bowls.