The Panthers have now lost their defensive coordinator to a head coaching job two years in a row. The good news is that, yet again, it seems like they have someone in-house who is ready to take over. 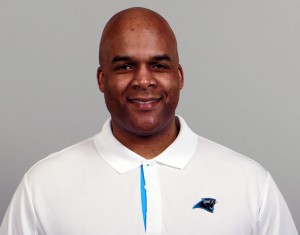 Panthers defensive line coach Eric Washington is likely to ascend to DC, according to Peter Schrager of NFL Network (on Twitter). Earlier this month, COO Tina Becker and GM Marty Hurney inked Washington to new deal, ensuring him the position if Wilks were to leave.

On Monday morning, we learned that Wilks is primed to take over as the Cardinals’ new head coach. Last year, the Panthers were in the same boat when Sean McDermott left to become the new head coach of the Bills. Wilks spent just one year as Carolina’s DC before getting his big chance, so this could be a launching pad to an HC opportunity for Washington down the line.

Last year marked Washington’s seventh season as the Panthers’ defensive line coach. In his time at that position, the Panthers have boasted one of the league’s most fearsome front fours. The Panthers have ranked in the top 10 in sacks in five of the past six seasons, including first in 2013, second in 2016, and third in 2017.